The festival of nine auspicious days is dedicated to Goddess Durga and her various forms. Many parts of the country are decorated with Puja Pandals, Mata Temples and Ram Leela’s happening all over. 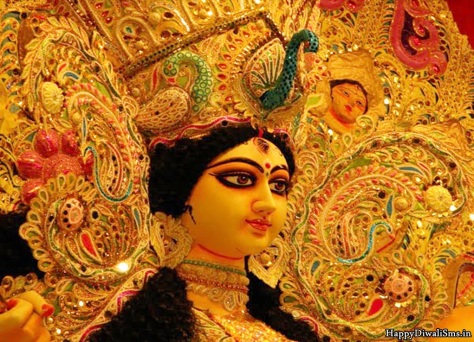 People celebrate the festival by visiting temples and offering pujas at Mother’s feet. People also observe fast during the day and eat at the sunset. In some places images of Mother Durga are also placed in beautifully decorates pandals. Special arrangements for pujas and vrats are arranged on temples dedicated to Shakti to mark these nine days as true symbol of adoration towards the divine mother and symbol of Power- Mata Durga.

Navratri (Sanskrit: नवरात्रि, literally “nine nights”), also spelled Navaratri or Navaratri, is a multi-day Hindu festival celebrated in the autumn every year. It is observed for different reasons and celebrated differently in various parts of the Indian sub-continent. Theoretically, there are four seasonal Navratri. However, in practice, it is the post-monsoon autumn festival called Sharad Navratri that is the most observed in the honour of the divine feminine Devi (Durga). The festival is celebrated in the bright half of the Hindu calendar month Ashvin, which typically falls in the Gregorian months of September and October.

Navratri is one of the most awaited festival in Gujarat. Here, Navratri is celebrated on the first nine days of Ashwin month. Devotees fast for nine days and worship the idols of the goddess. According to the tradition, the women who are observing the fast bring an earthen pot home, with holes, and light it every evening and perform the aarti of maa durga. The pot is called ‘Garbi’ and the light symbolises Shakti, ‘power’.  Garba raas and dandiya raas are the two beautiful forms of Gujarati dance which is usually performed by Gujarati men and women, who are traditionally dressed in chaniya choli and kurta. Who can forget spirited Deepika Padukone & Ranveer Singh dancing to the beats of Dandiya in Raas leela. 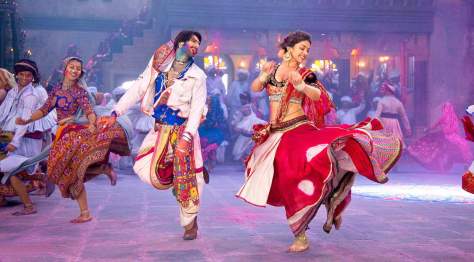 Gujaratis in Mumbai create “Mini Gujarat” almost all over Mumbai and celebrate Navratri with Garba and dandiya nights with Celebrity singers/ performers like Falguni Pathak and what to say of Navratri in Ahmedabad’s University Grounds where youngers dance the night out on electrifying Garba beats with amalgamation of traditional & modern music. DJs belt out one number after another, however older generation feels this is not Navratri all about but new generation has their own ways of celebrating Navratri.  It is my dream to be there for Navratri someday.

When it’s Navratri, nothing but ethnic wear suits the occasion and Lehenga Choli fits perfectly for the Dandiya nights and visiting Pandals with friends and family. Triveni has come up with some mesmerising collection of Lehengas.

Their Banarasi Celebration as the name suggests celebrates ethnicity with royalty. The collection is inspired from the woven work of Banarasi Silk and contains Santoon lining. The embroideries are to add up to the embellished look. The collection comes in different shades of pretty pinks, alluring orange, ravishing green and bewitching bright yellows. The zari work to give a splendid golden touch to Lehenga and add up to the majestic look of the woman who carries it. 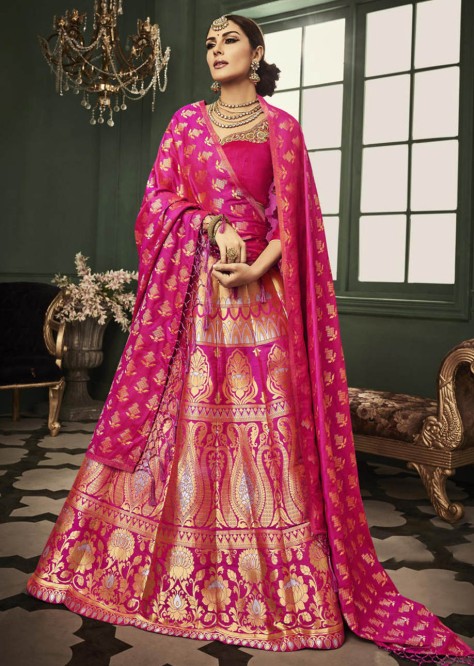 Ethnic Era reminds you of the fact that era of ethnicity never ends and it should not as it celebrates culture. The collection brings in the pairing up of most contrasting colors, from dark magenta colored Lehenga to light peach Dupatta. The Art Silk collection contains intricate designs and patterns throughout the Lehenga-Choli and a plain dupatta with borders on side. It contains of patch work, laces, stone work and embroideries. 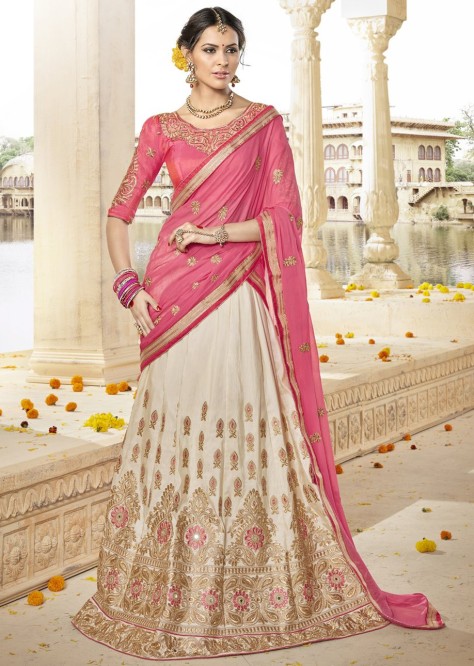 Cinderella, if you want a woven touch and silk resplendence and yet an easy to carry Lehenga Choli so that you can set your feet free (like Cinderella) while dancing to the tunes of Navratri songs, go for this. From colours of all range, orange, green, pink, beige and brown, art silk Lehenga Choli are teamed up with chiffon dupattas.

Take your pick and dance your heart out this Navratri!

4 thoughts on “Swirl to the Dandiya beats this Navratri…”